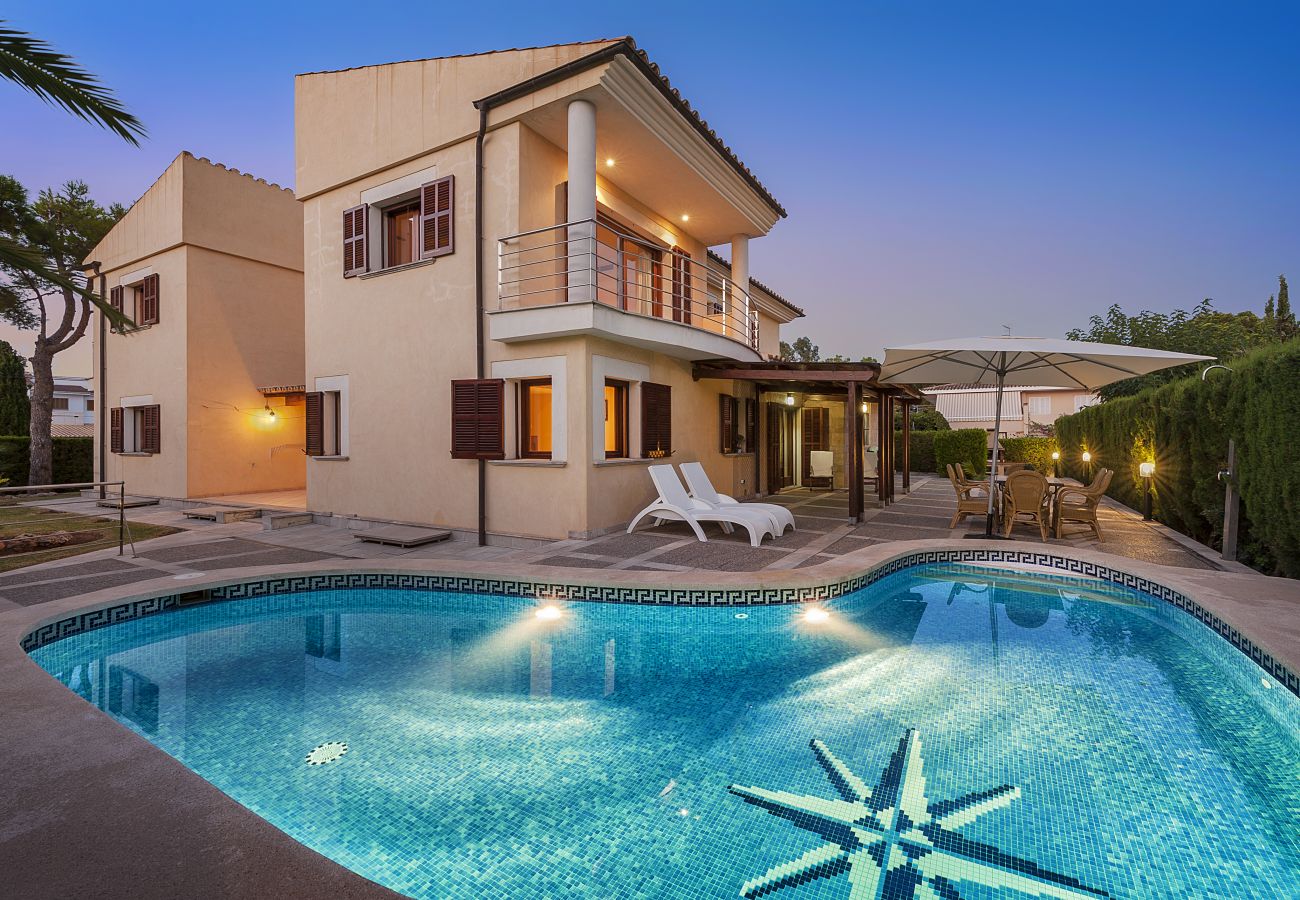 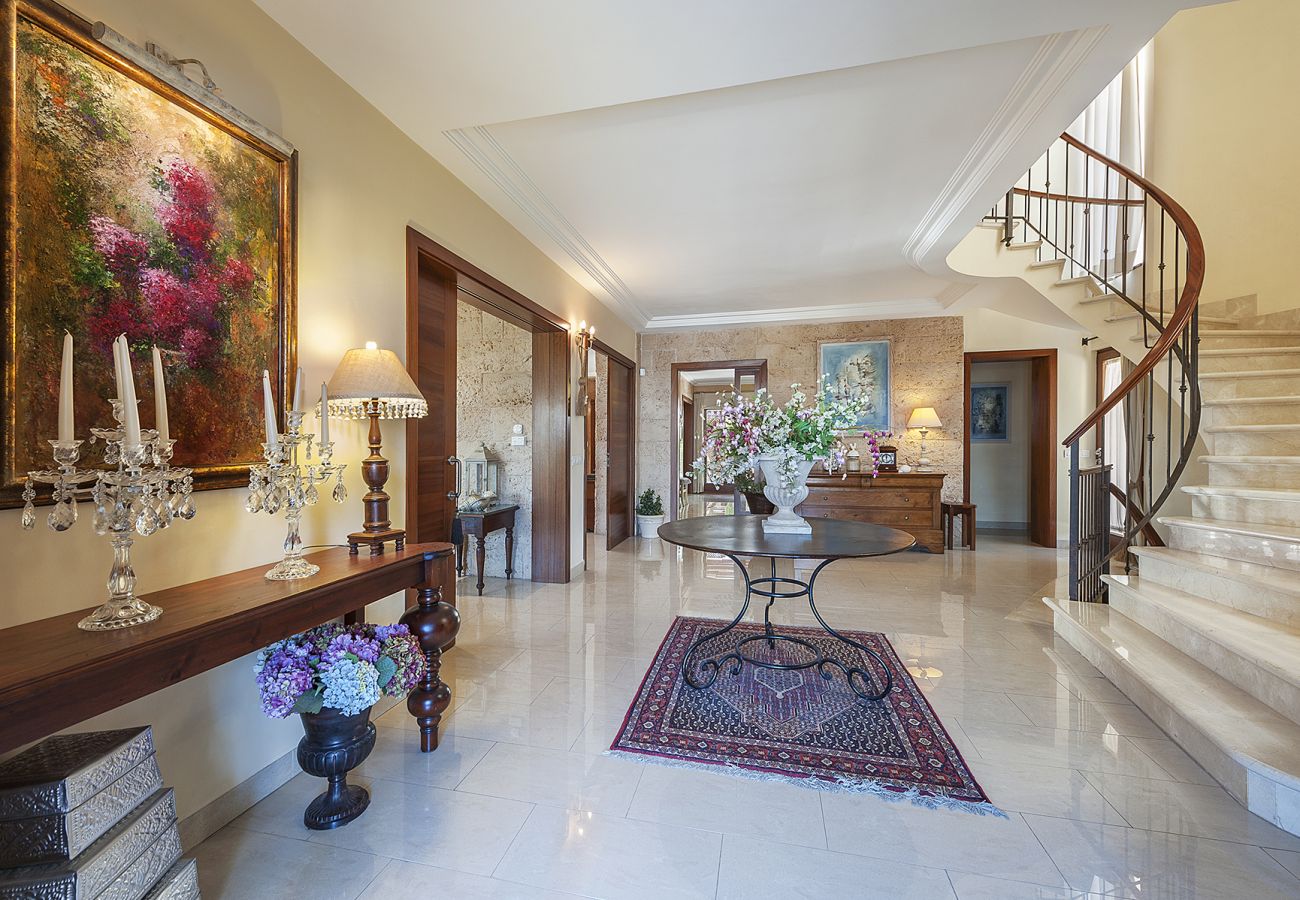 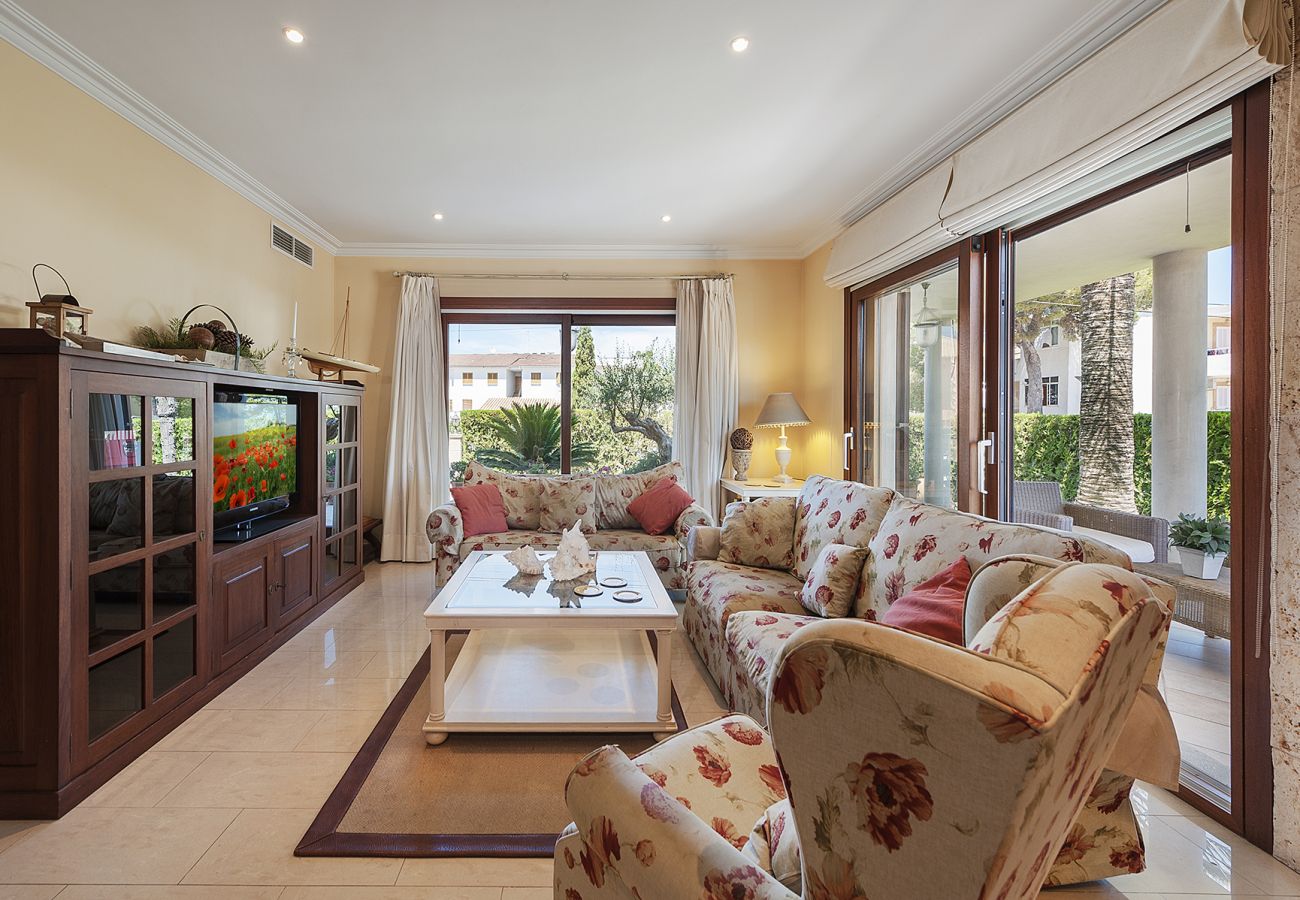 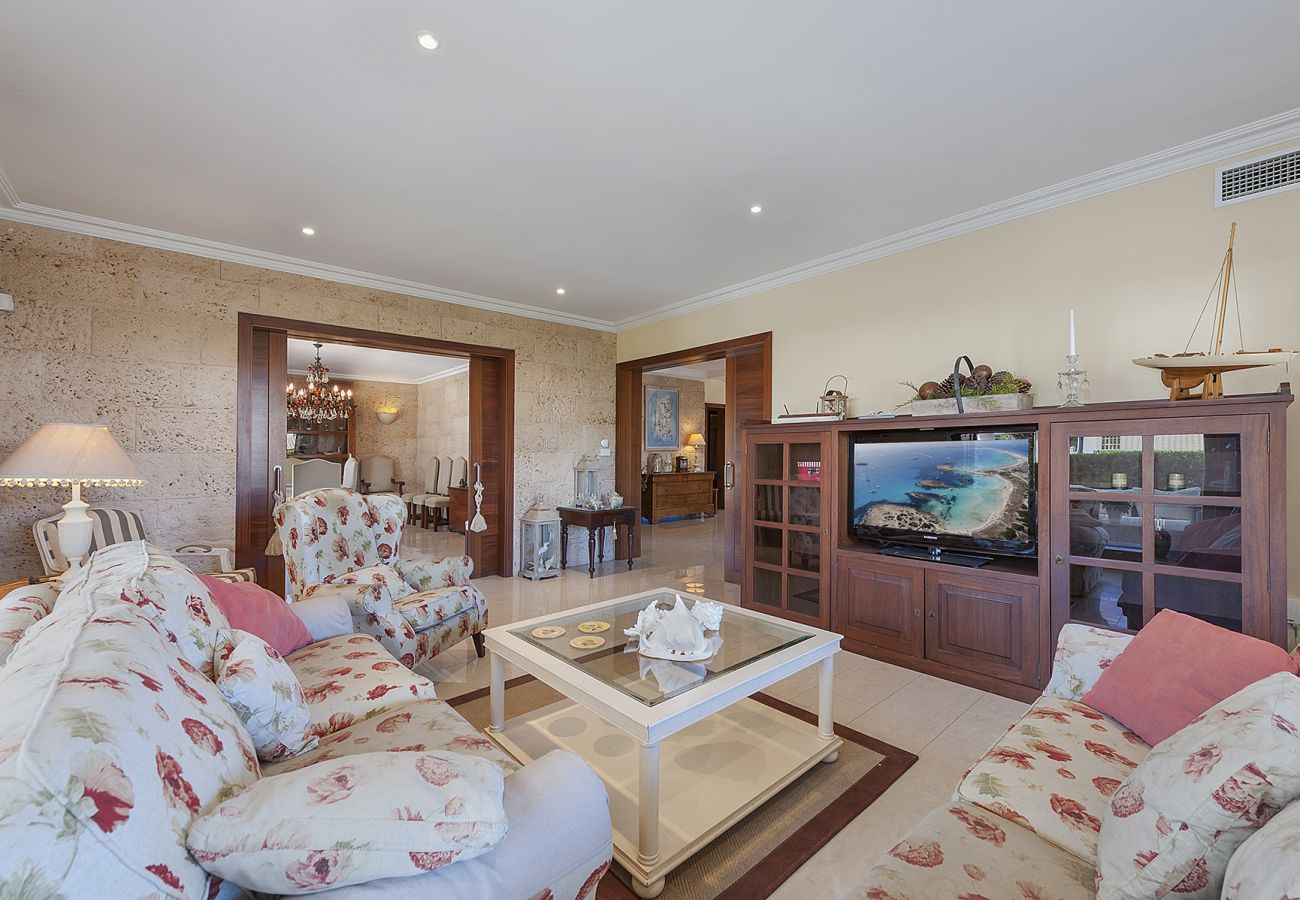 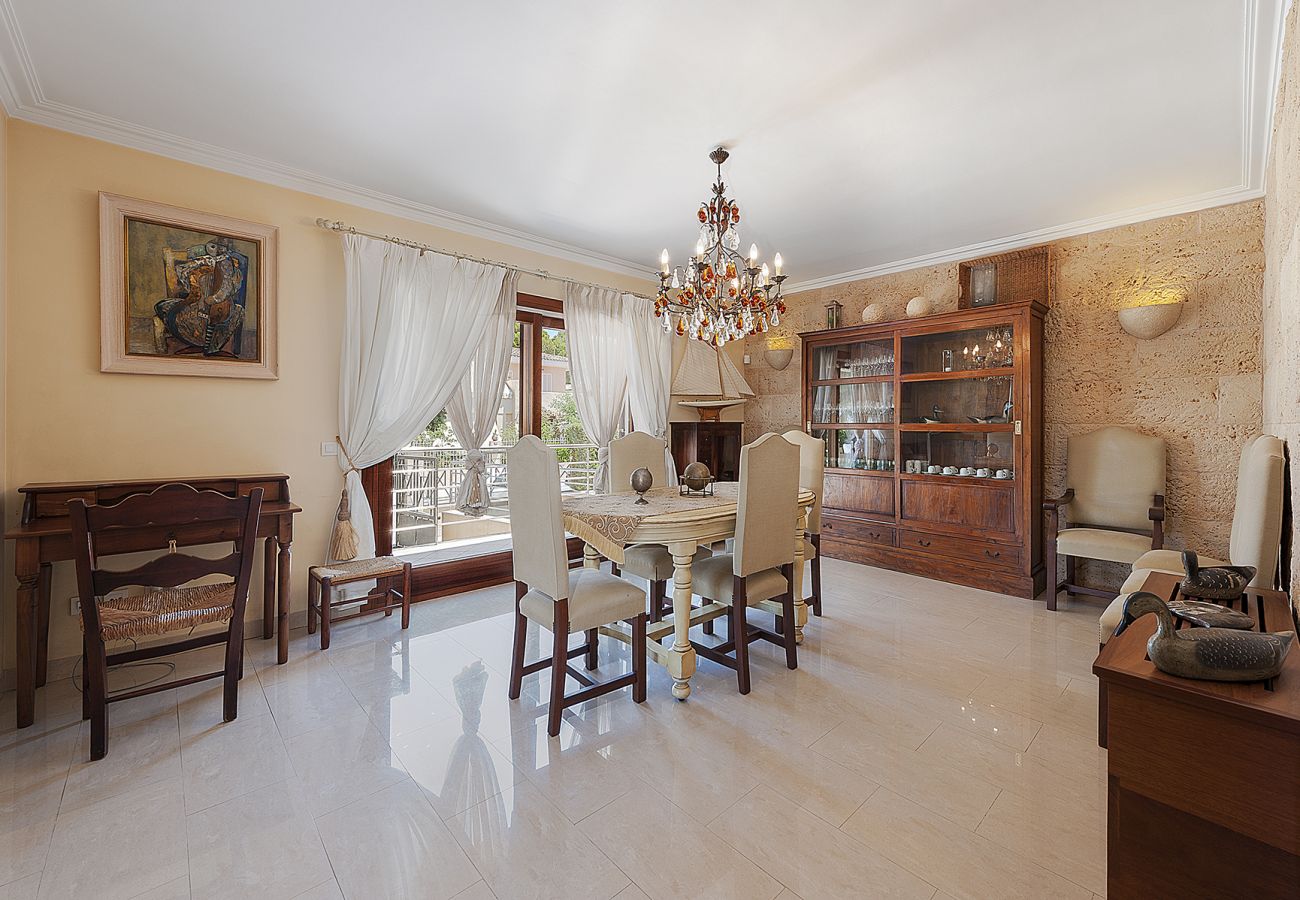 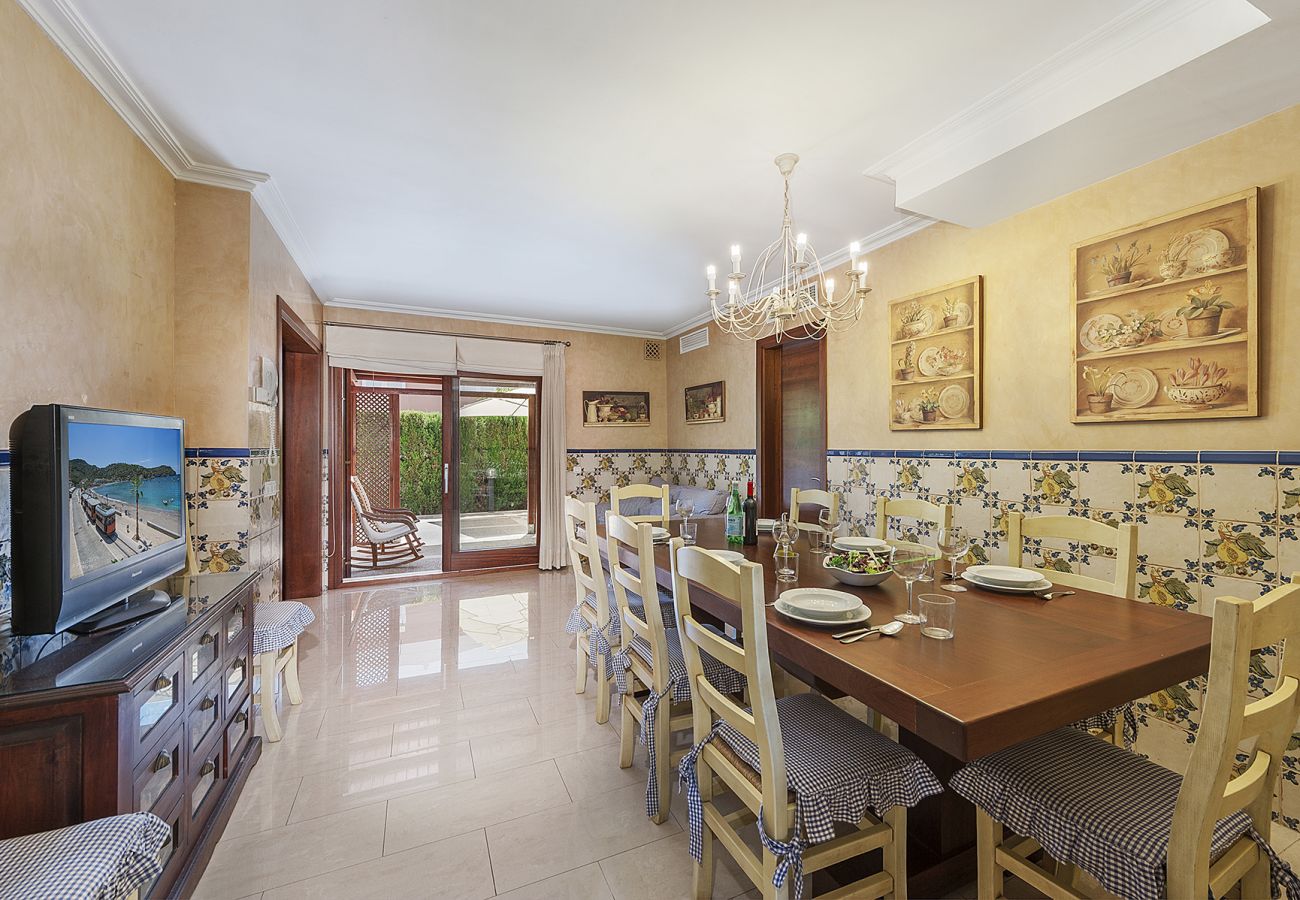 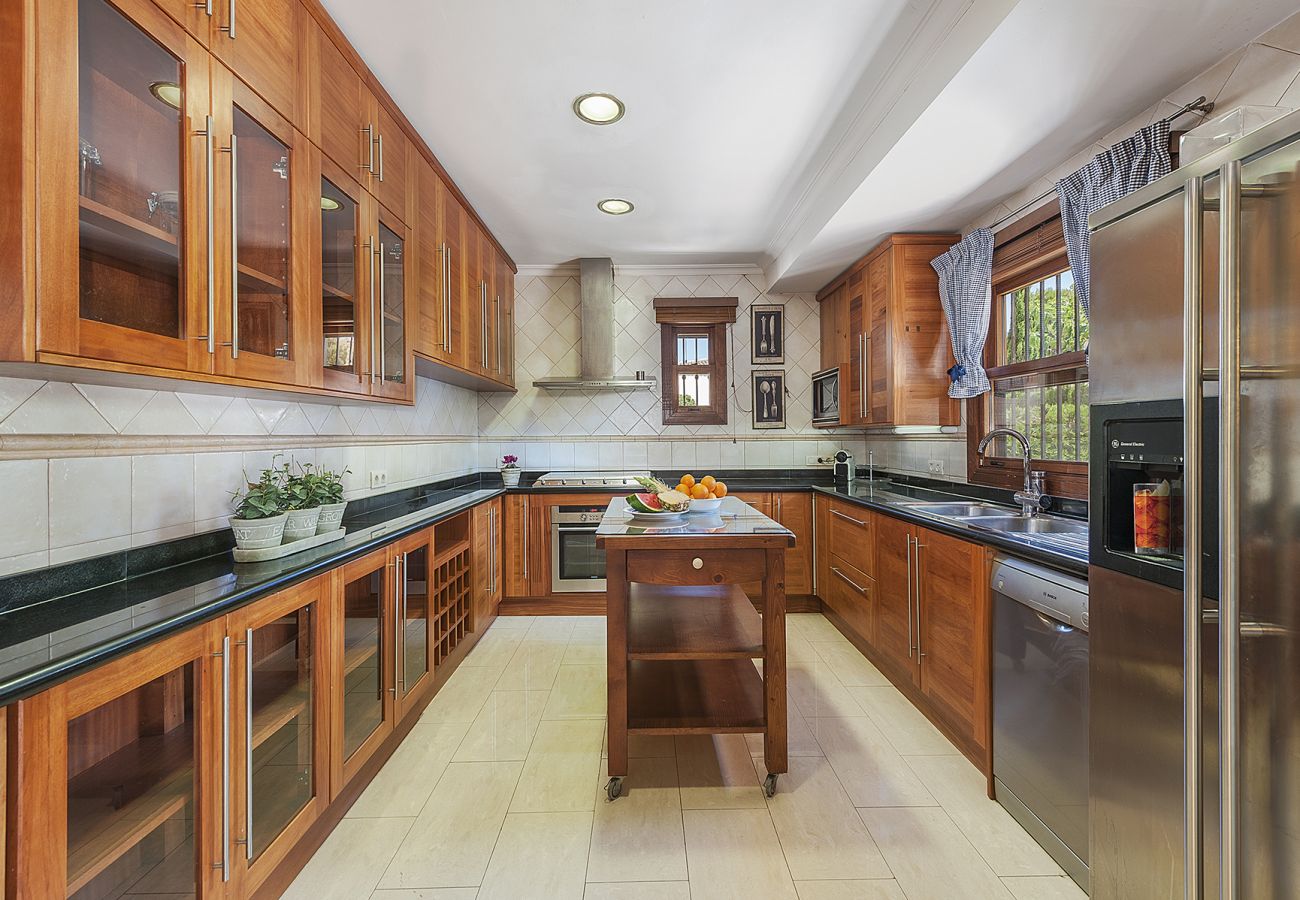 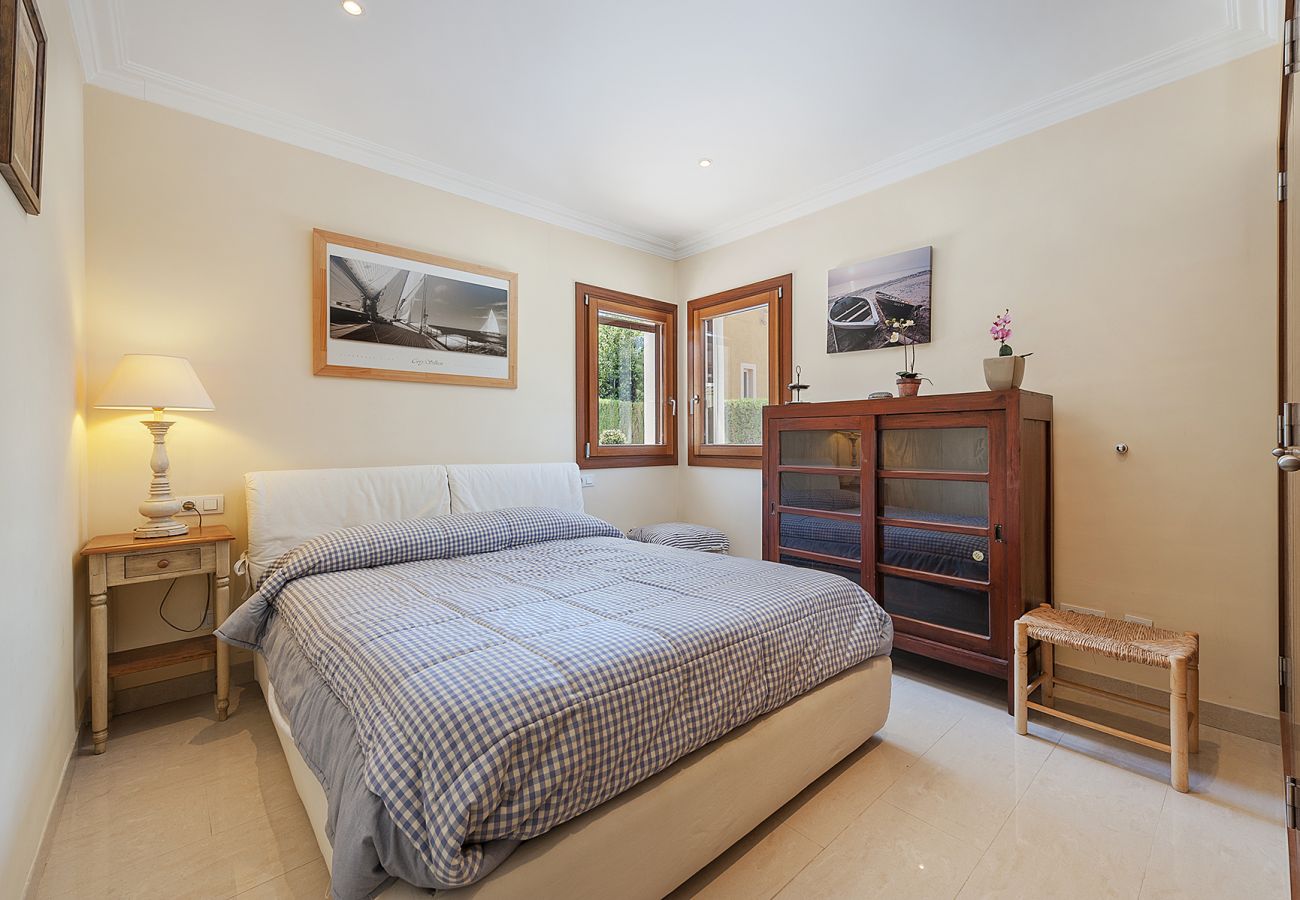 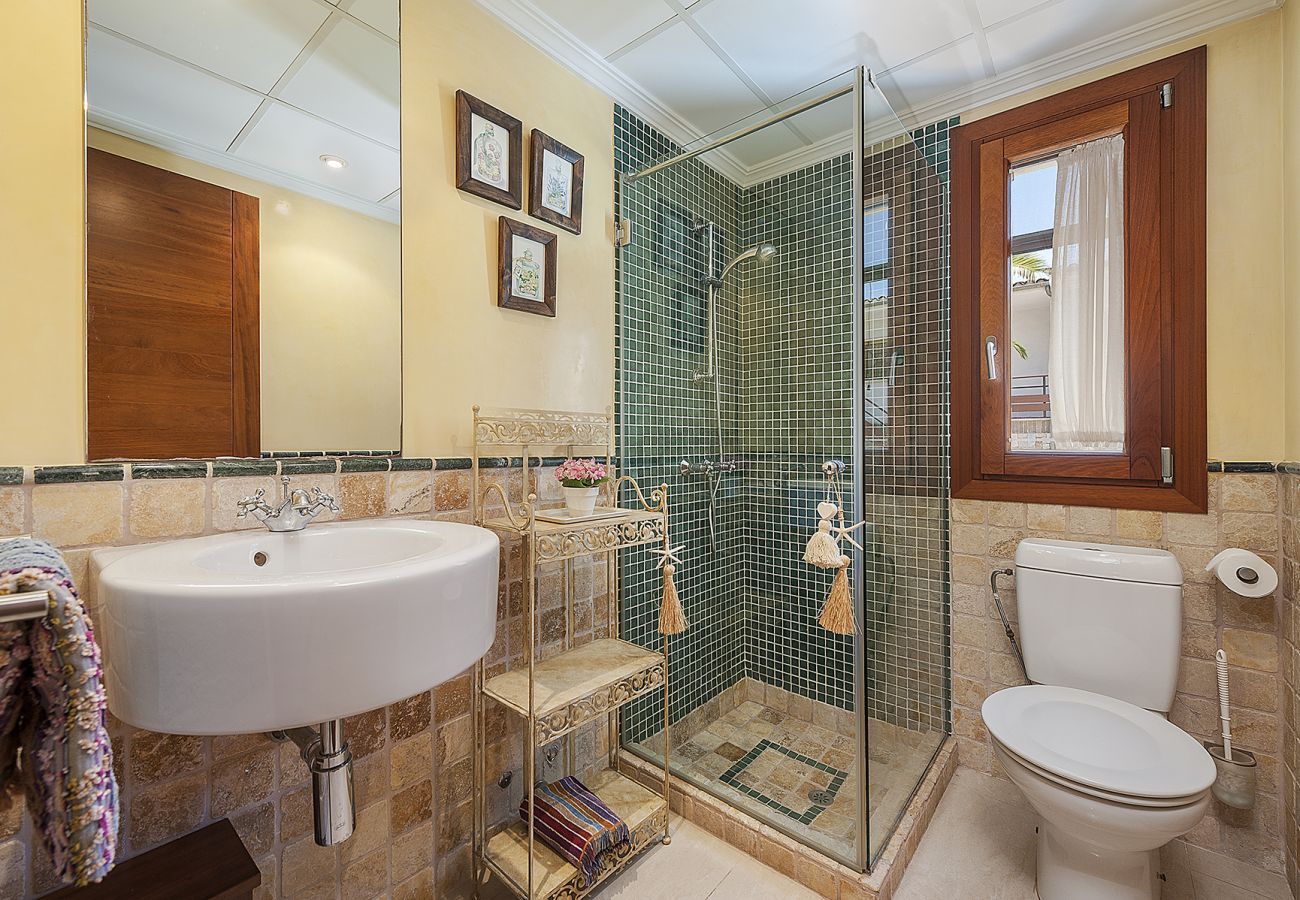 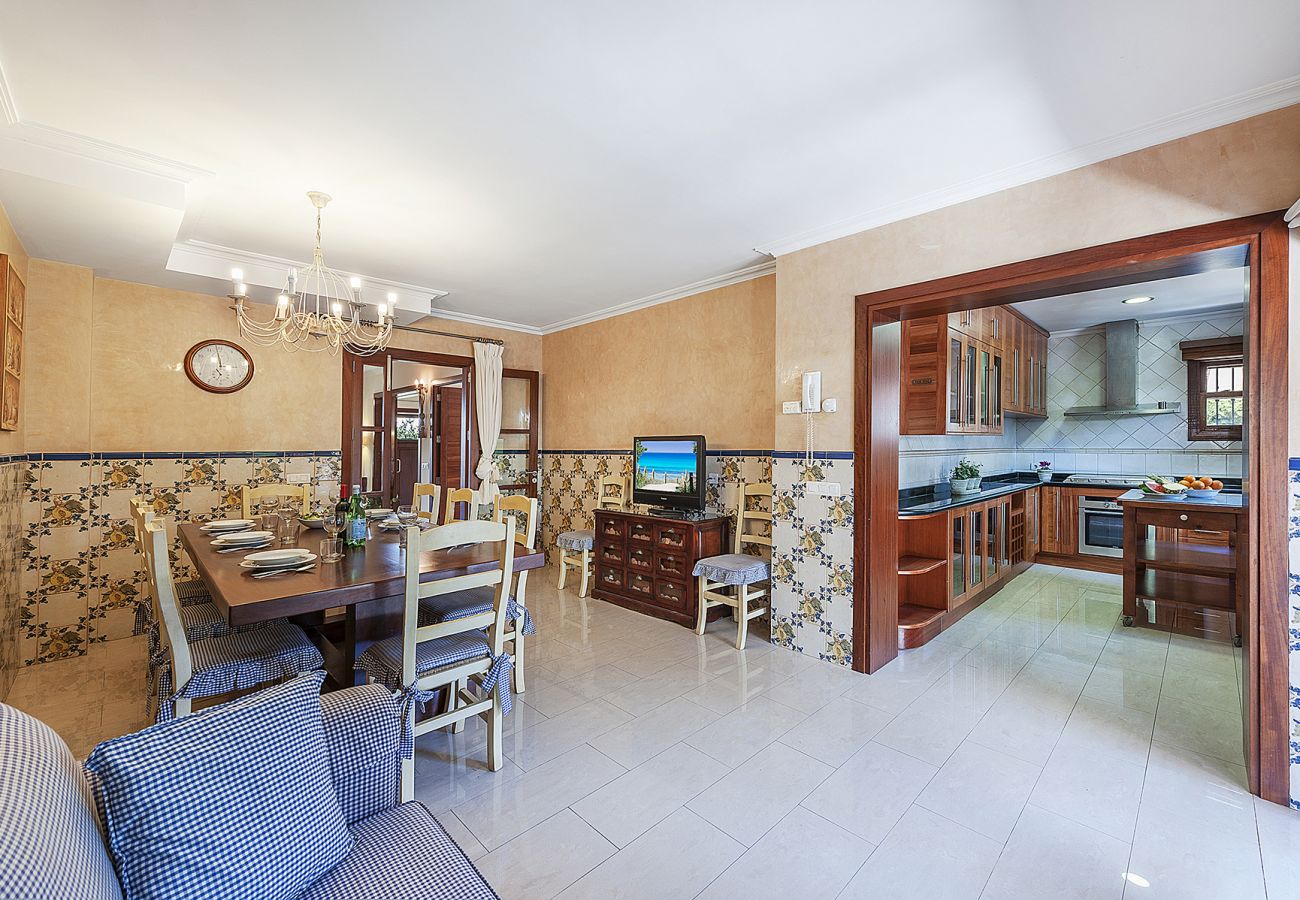 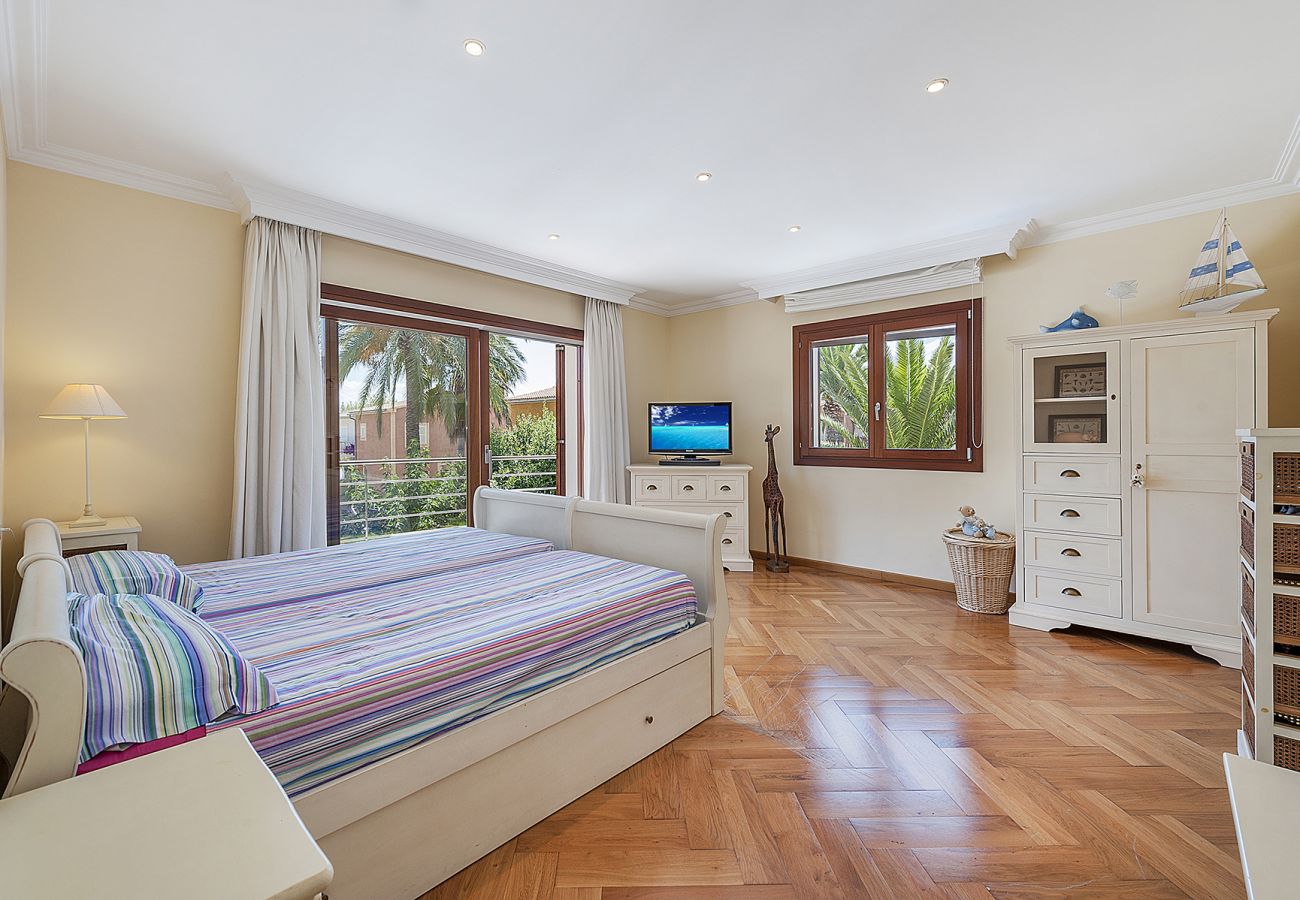 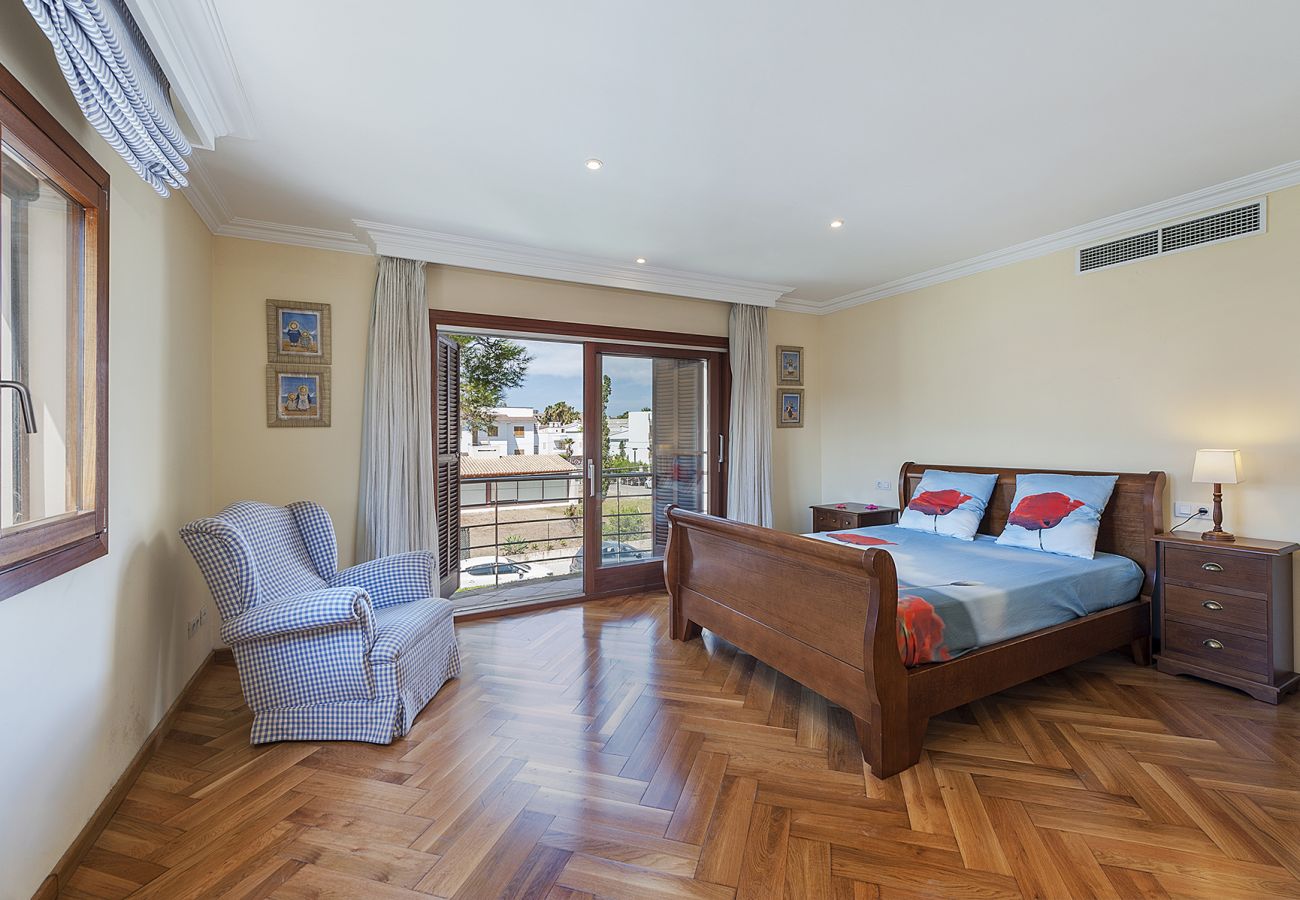 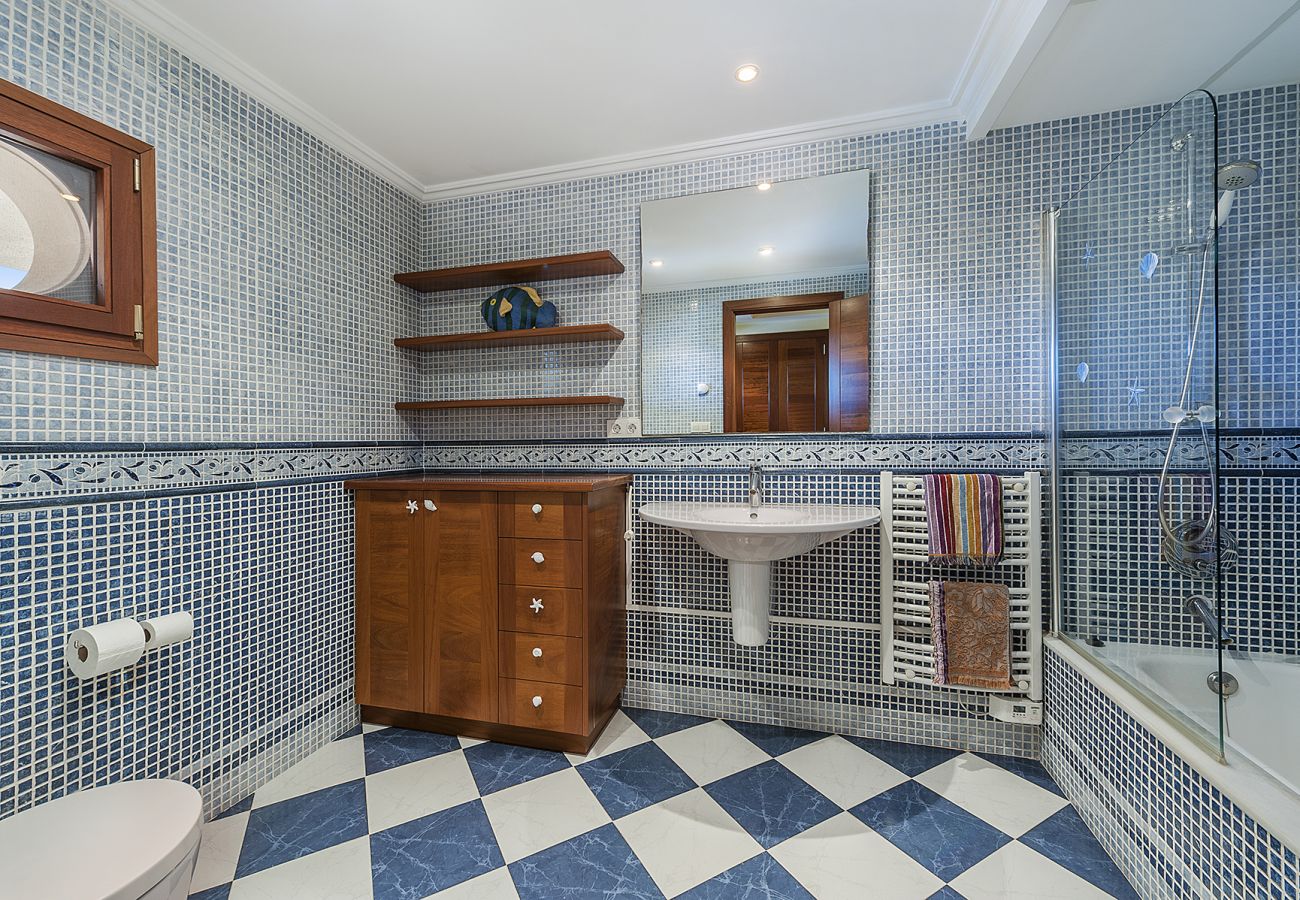 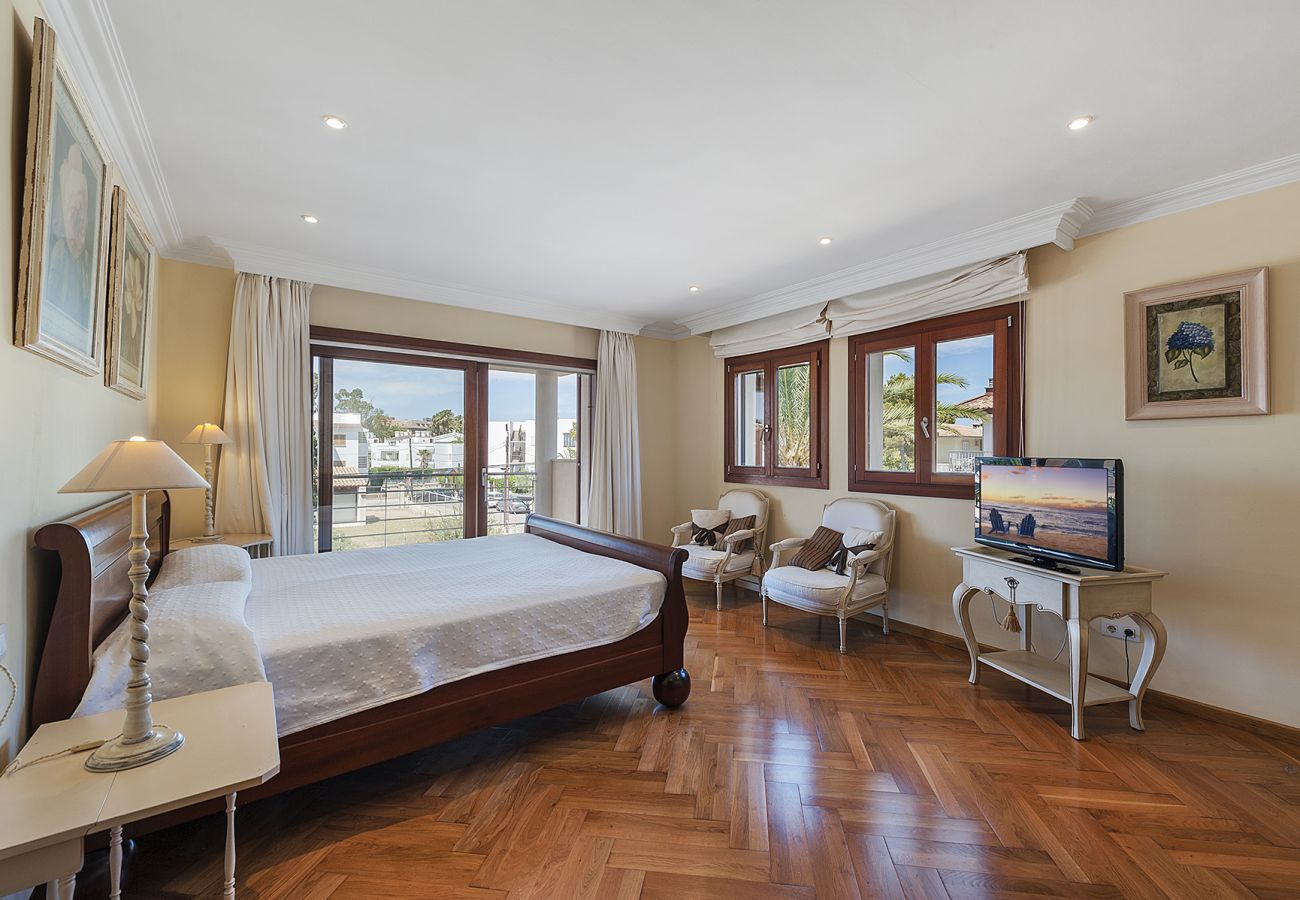 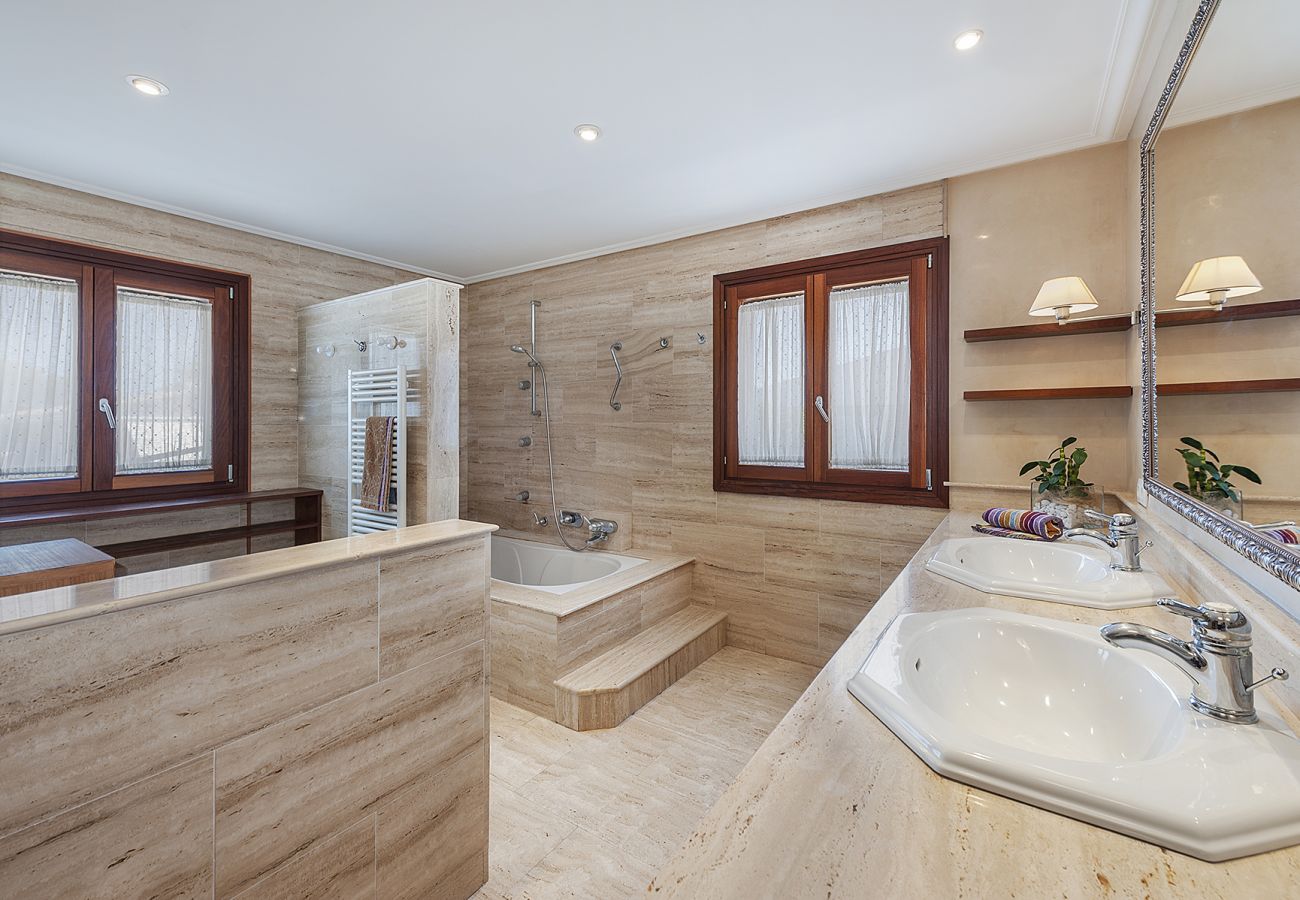 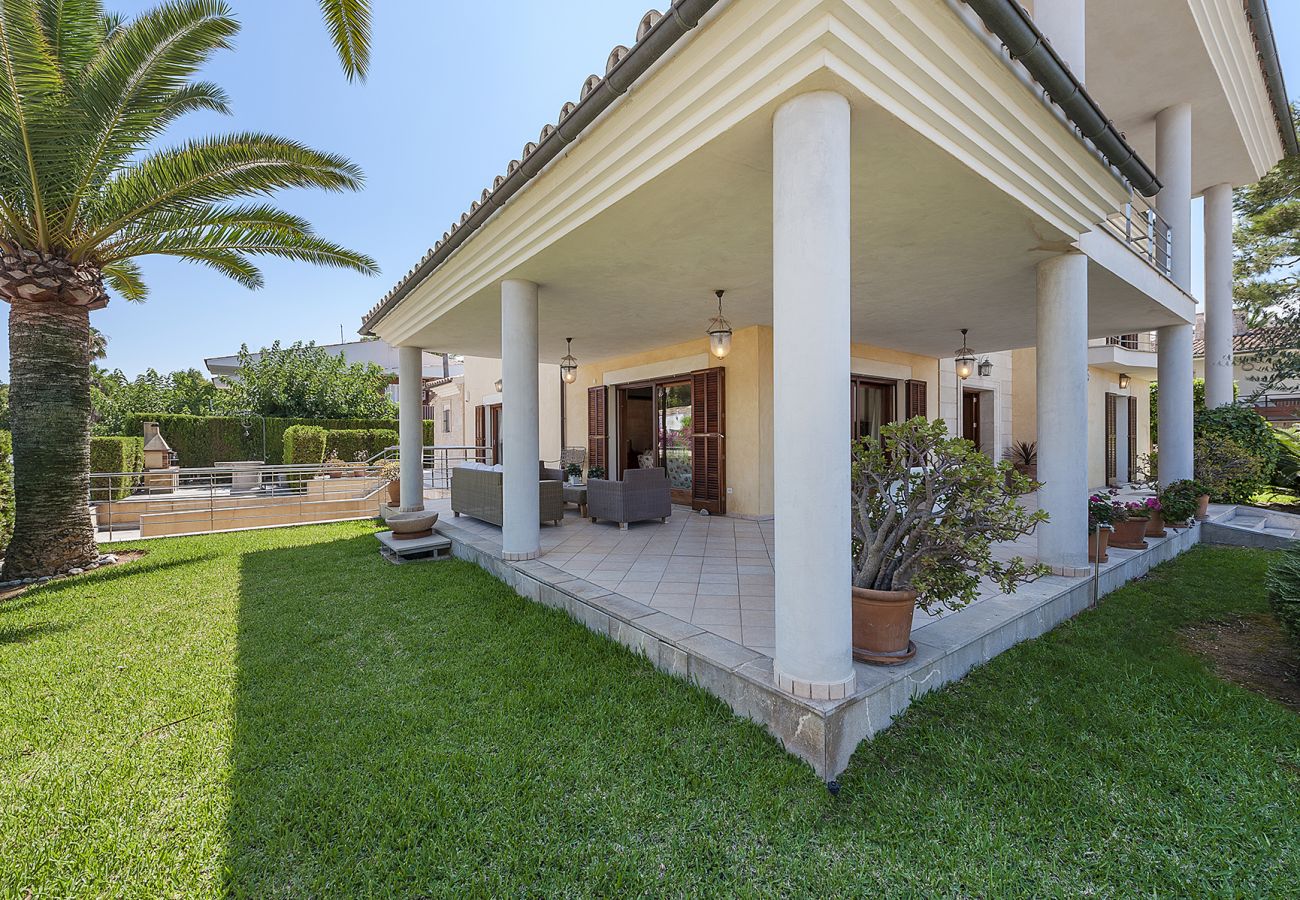 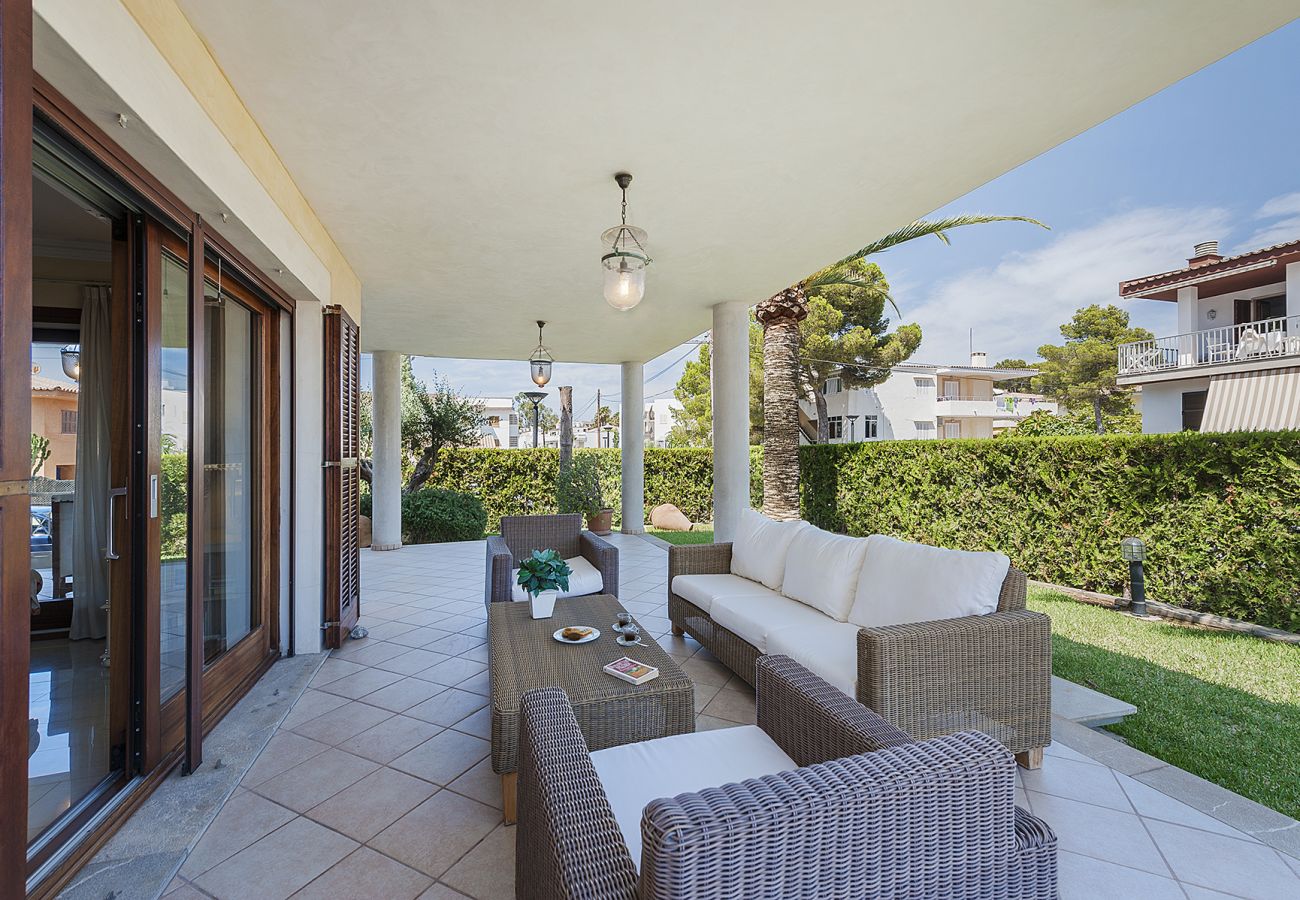 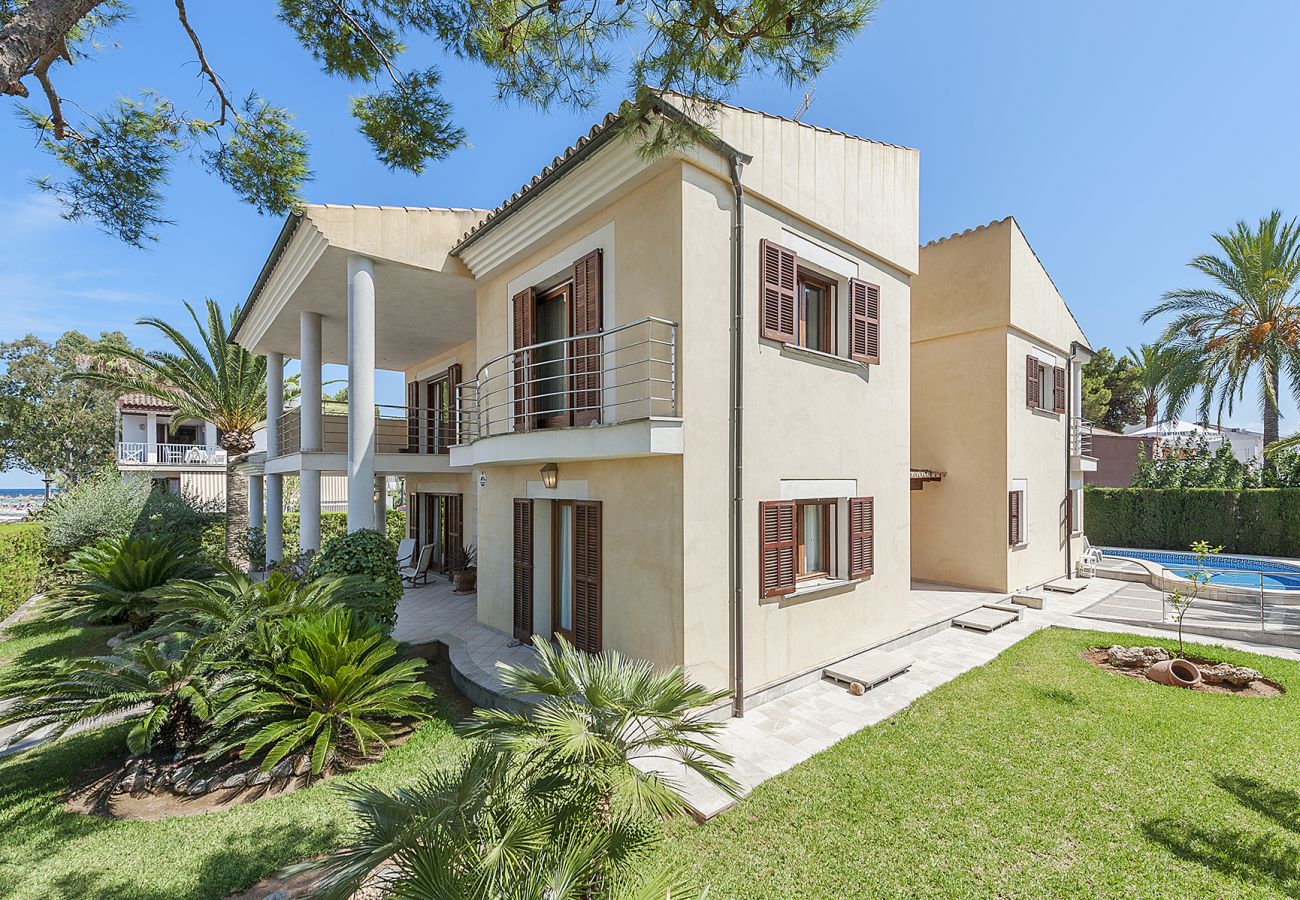 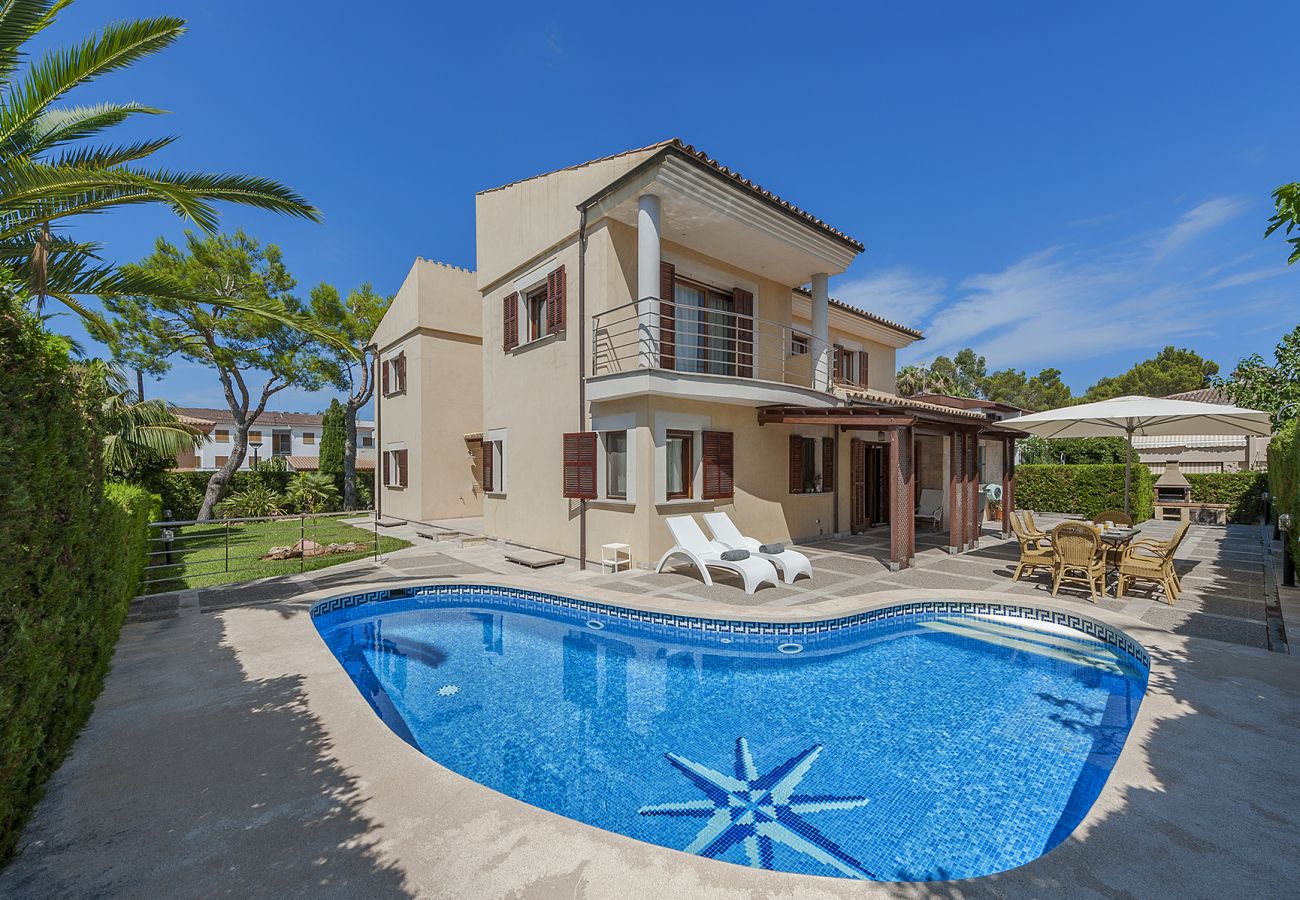 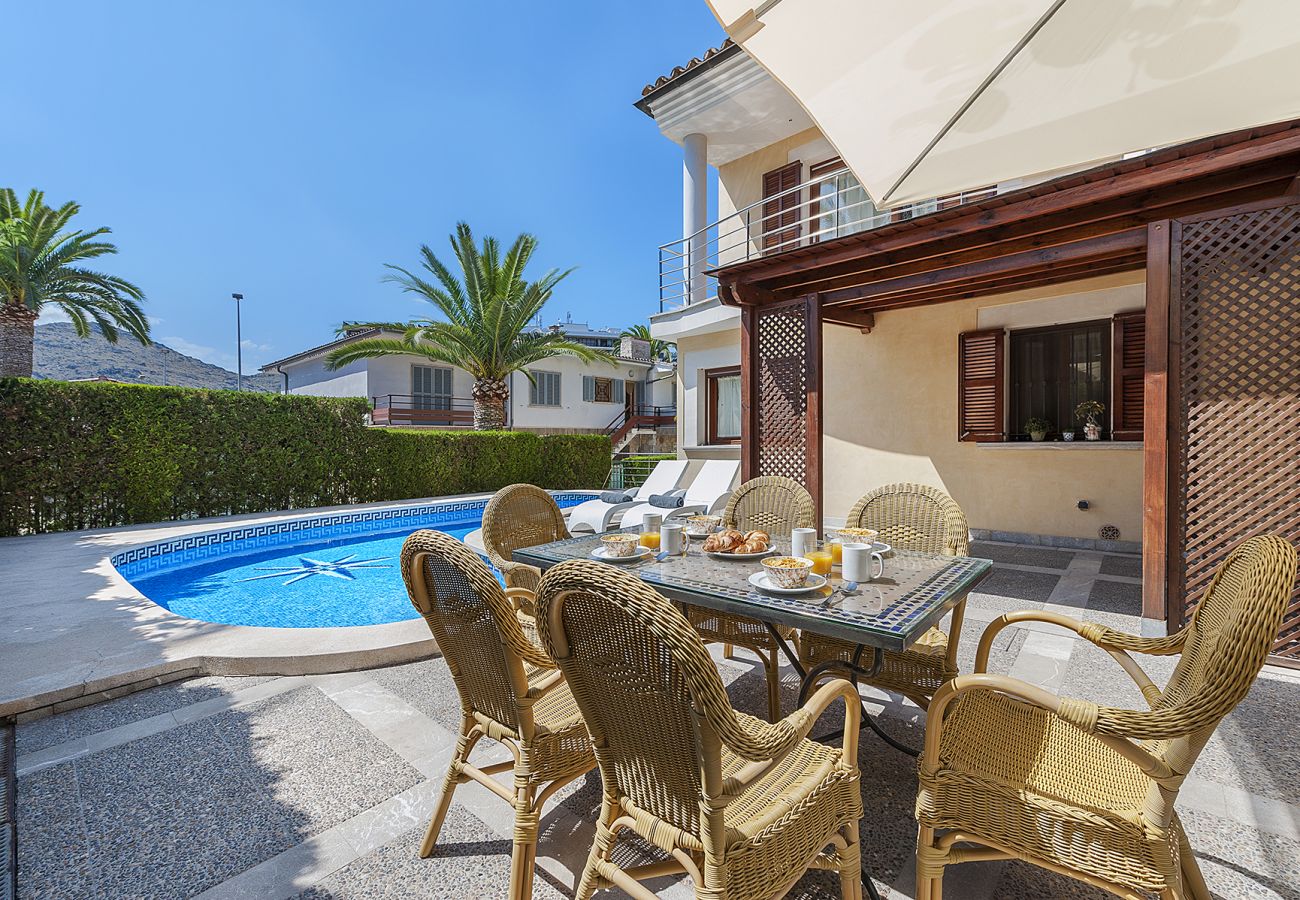 Villa Northern Star has it all! Wonderfully appointed and superbly situated within walking distance of one of Mallorca’s longest sandy beaches and all amenities, this is one of the most sought after locations in the north of Mallorca.

Universally appealing across all age groups it is impossible not be impressed by the fact that all the key ingredients for a memorable, relaxing holiday are just a short stroll away. To put it simply… arrive, unpack and put the car keys in a drawer!

A captivating sense of space and style permeates the house interior where all rooms are well proportioned and attractively decorated; the colour scheme striking in its simplicity. A devotee of local art the property owner has adorned the walls with eye-catching pictures of notable island scenes plus a selection of individual artefacts collected on his personal travels, some obvious in their detail, others more abstract but all enhancing the already appealing ambience still further.

Furnishings are predominantly modern with a subtle classical twist, something particularly evident in the grand principal bedroom where the carved Regency-style bed and imposing chest of drawers are notable family heirlooms handed down through several generations. Exposed wooden and pristine marble floors bring a stately elegance and help amplify the already spacious feel of this fine property while two separate seating areas, around the outside of the villa allow larger parties or sharing families their own space in which to relax with a book, laptop or just watch television.

Bordered by ample sun terracing, an in built barbecue and a long shaded dining terrace, the private swimming pool is much longer than average and, with Roman steps across the entire width of one end, is particularly user-friendly for younger (or older?) family members as well as non-swimmers.

Testament to its reputation as one of the most family-friendly locations in Mallorca Alcudia enjoys one of the highest ratios of repeat-visitors on the island and yet, at the same time, retains a wonderfully laid back atmosphere, even in the height of summer.

Villa Northern Star has everything on the doorstep’ as it is only 100m to the sweeping 12km long bay (along which you will find water sports, scuba diving, boat trips, various eateries and a plush yacht club), to the nearest restaurant and 500m to the main Alcudia strip; the hub of Alcudia with its comprehensive amenities and vast choice of restaurants to suit all tastes and pockets. Only slightly further afield are a nature reserve, two golf courses, floodlit tennis courts, a wealth of cycling and walking trails as well as scenic drives through the Tramuntana mountains or to Mallorca’s most northerly point at Cap Formentor.

DISCLAIMER: Additional costs for air conditioning usage apply. The optional use of the air-conditioning will be charged on-site in cash (€ 0.30/kWh)

Tourist tax: Included in the total price
Tax calculationPlease add the dates of the stay to display the tax conditions

Amount: €1,000.00 /booking Payment method: credit card number as a guarantee To be paid when booking.

- No smoking
- No pets allowed

From the booking date until 181 days before the check-in, there is no cancellation penalty

In case of cancellation the following charges will apply: 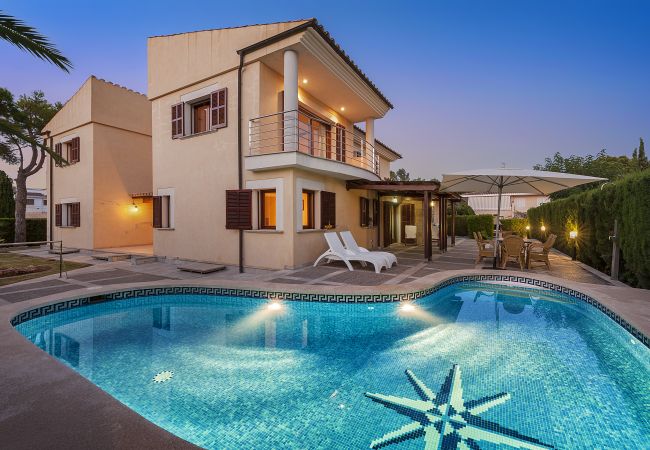 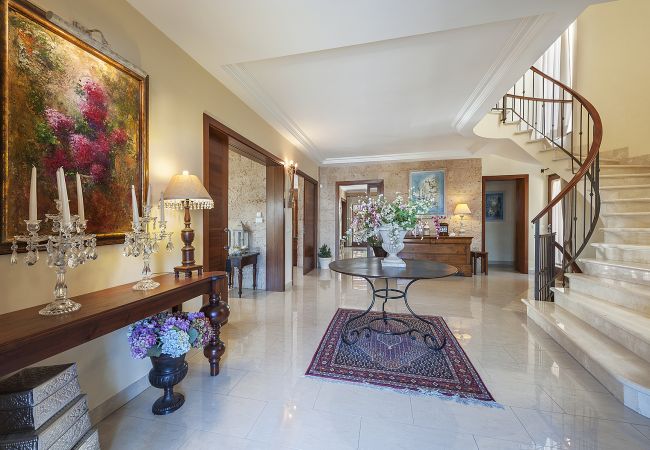 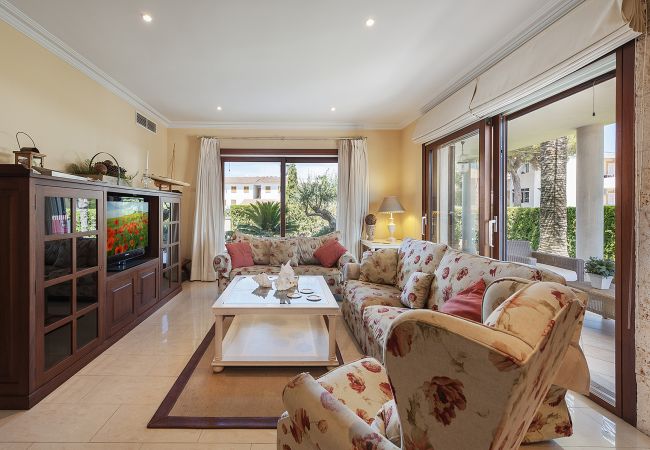 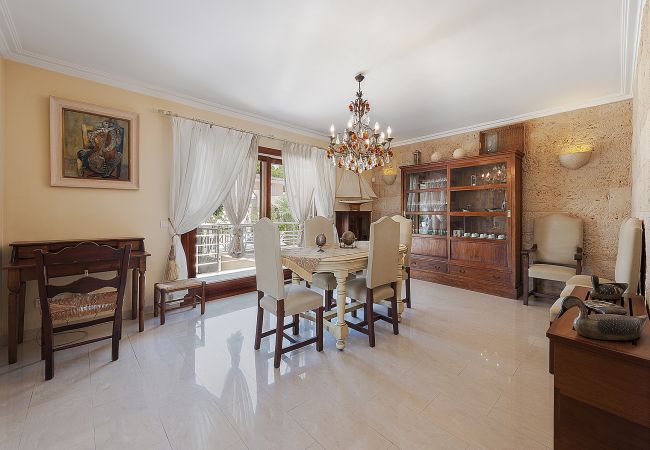